Home / Running / Training / My quest for a BQ marathon – Part One

My quest for a BQ marathon – Part One

I spent a good chunk of my teens and adult years smoking, drinking and occasionally dabbling in recreational substances. It left me with poor fitness, low self-esteem and a variety of other physical and mental niggles.

In 2013, I was 34 and rebounding from a failed relationship, I bought a pair of Adidas running shoes. I’d already decided to stop smoking and needed something new on which to waste time and money.

I’d had no prior urge to run but it seemed quite popular and very accessible – as far as sport goes.

I started on a treadmill and worked my way up to 5 and then 10K. 10K was as far as I could ever run, I decided. To go further would endanger my very sanity.

One day I went further anyway. I just kept on running and it felt wonderful. It was like in 2001: A Space Odyssey when he evolves beyond the human form, reborn a higher being.

I entered the Great Scottish Run in October 2013, aimed for a 45 minute finish but was ecstatic to come home in 45:42. Another go at the sub-45 when I ran a ‘Movember’ 10K and learned what happens when you go out too ambitious (you get a stitch so bad you’re forced to walk and vomit).

On January 1st 2014 I ran 12.5K. I can’t describe how smug I felt. Within days I’d entered a marathon (I also entered a half marathon in the lead-up – something us smart and experienced runners do). Such was my newly discovered passion and talent for running I was convinced I’d be brilliant at it. Yes, I got carried away.

I had five months to train for my first marathon – Edinburgh 2014 – and my target was 4 hours. 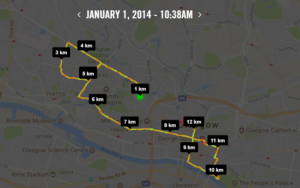 It was after this run that I first flirted with the idea of running a marathon.