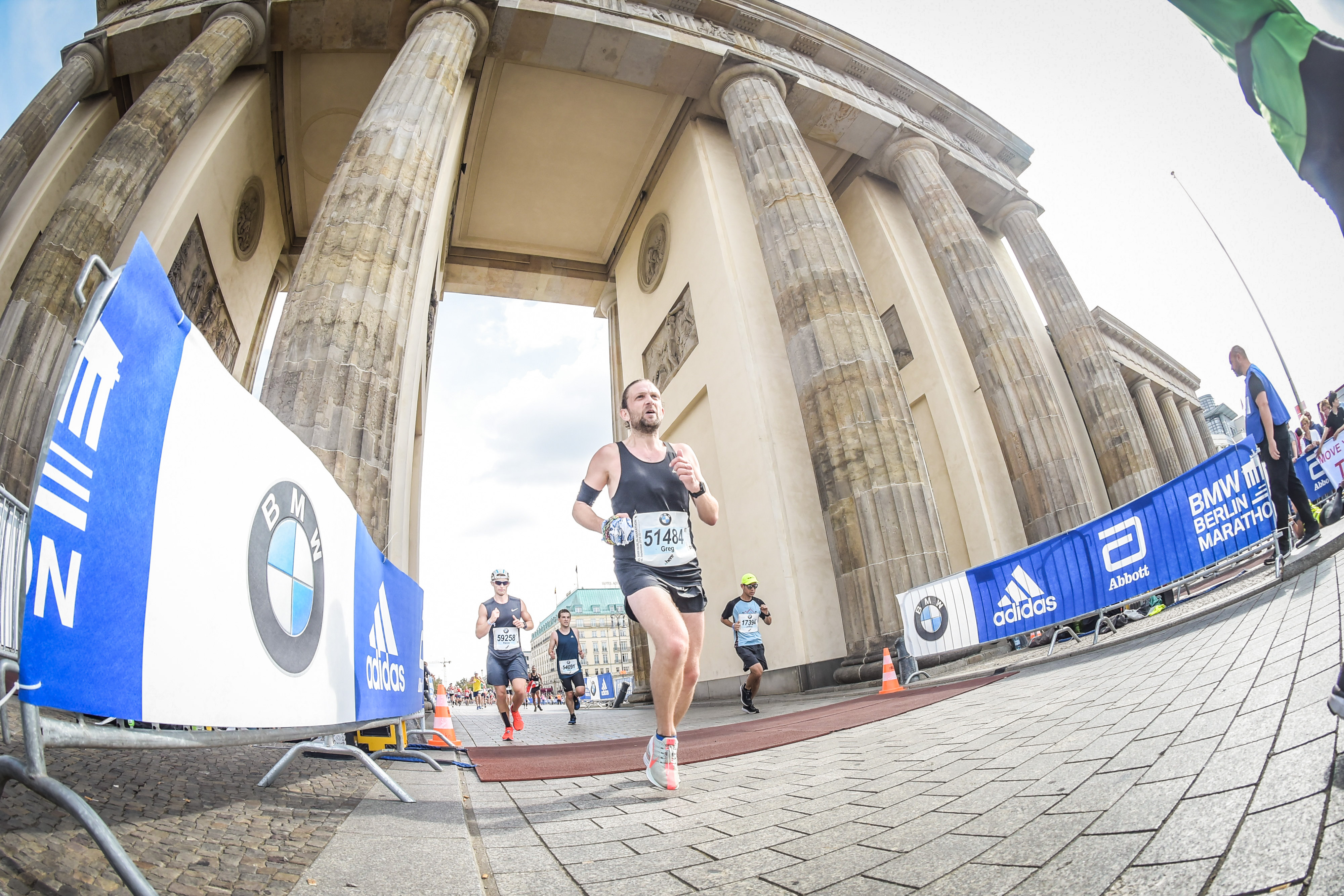 The aim was sub 3 hours. A mark that will put you among the top 5% of most marathons, for women it’s likely 2 or 3%. It feels like a mark you have to train seriously to meet, one that gets a bit of respect from runners. For me it felt like my chances were not good. And not like 1 in 100 not good.

“So you’re telling me there’s a chance?”

I’ve run for about 5 years but only 18 months ‘properly’. That is with half-decent base training, no long breaks, better nutrition, maintenance and being a bit smarter about it. Training for Berlin was going to take 18 weeks, and basically looked like this:

I don’t drink much but abstaining made a positive difference to my energy levels and to my body fat. I had a drink on special occasions only. Luckily Isla isn’t much of a drinker and we happily stuck to tea and coffee for the most part.

I bought a pair of Nike Pegasus Turbo. They were fucking eye-wateringly expensive but turned out to be worth it. I wish the best trainer I’ve ever used wasn’t the most expensive, but it is. Saucony Kinvaras, which are almost as wonderful, were my other weapon of choice.

I hurt some toe ligaments which I mistook for a potential stress-fracture and eased off running for a couple of weeks. Pulling out of the Clyde Stride after 19 miles in 6th place  bothered me more than I thought it would.

I didn’t do enough strength training because I couldn’t afford to have DOMS for two days, and I hate doing it too. I did a shit-load of foam rolling, becoming to watching an evening movie while prone on the rug, grimacing through pain. Isla was great at keeping me honest about this, basically kicking me off the couch to lie among the dog hair and fix my knotted muscles.

On the day I needed everything to go well to get sub-3. No mystery pains, no toilet drama, no heat-waves, I required proper race day preparation and a bit of luck.

By the time I got to Berlin I was about £1000 in the hole. The race entry alone is $100, and $30 for a finisher shirt. It felt like a rip-off but I wanted to wait until after the event before I ruled on that. Flights, hotel, massages, those fucking wonderful trainers, it all added up and I felt a lot of pressure to have a good race. Imagine pulling up after a mile?

We fought our way through the massively busy expo to get my number, making a mental note never to enter a major event again.

On race day the forecast temperature wasn’t as bad as expected. Isla managed to shout at me after about 5 and 13 miles which boosted my spirits. I was slowed down a bit by traffic but was on-plan for a slight negative split (1:31/1:28). I’d been seeded among the 3:15-3:30 runners (because I am one) and had to overtake what felt like hundreds upon hundreds of people running 7:10-30 pace. I knew I was burning precious energy but I had no choice.

At 18 miles my quads began to hurt. It would wear off after a few minutes but come back. After three miles of this they began to not work properly. It’s at these moments you find your weak spots. My HR was holding fine, I wasn’t tired, I had no cramp, energy felt good. But my thighs weren’t thighing any more.

If this happened at 24/25 miles I feel I could have grit my teeth and toughed it out. I was still 5 miles from home and it felt like a long way. I felt like I was almost walking, the sub-3 was gone and my head went a bit. What I should have done was establish a new race pace and worked on that. My splits show I was still moving at 7:20ish but I succumbed to the pain and started walking at water stops, saving just enough for a sprint finish.

Looking back I’m pretty clear what I did wrong. I didn’t do enough strength work. This was my weak spot but I hoped I could train around it. I also need to get better at working through the pain. I’ve not raced enough to get better at really pushing when things get tough.

I tried to be disappointed at failing sub-3 but in the back of my mind I knew it was a huge stretch. You get the time you deserve in a marathon, and I didn’t do enough to get it.My time qualifies me for the Boston Marathon which is another mark I once felt was beyond me.

Maybe if there was less traffic I’d have got closer? There’s nothing I can do about that, but I could have done more squats.

I was pretty elated at the end, I found Isla for an emotional reunion and we went away to enjoy some beer and pizza. Both equally glad a demanding training block had come to a happy conclusion.