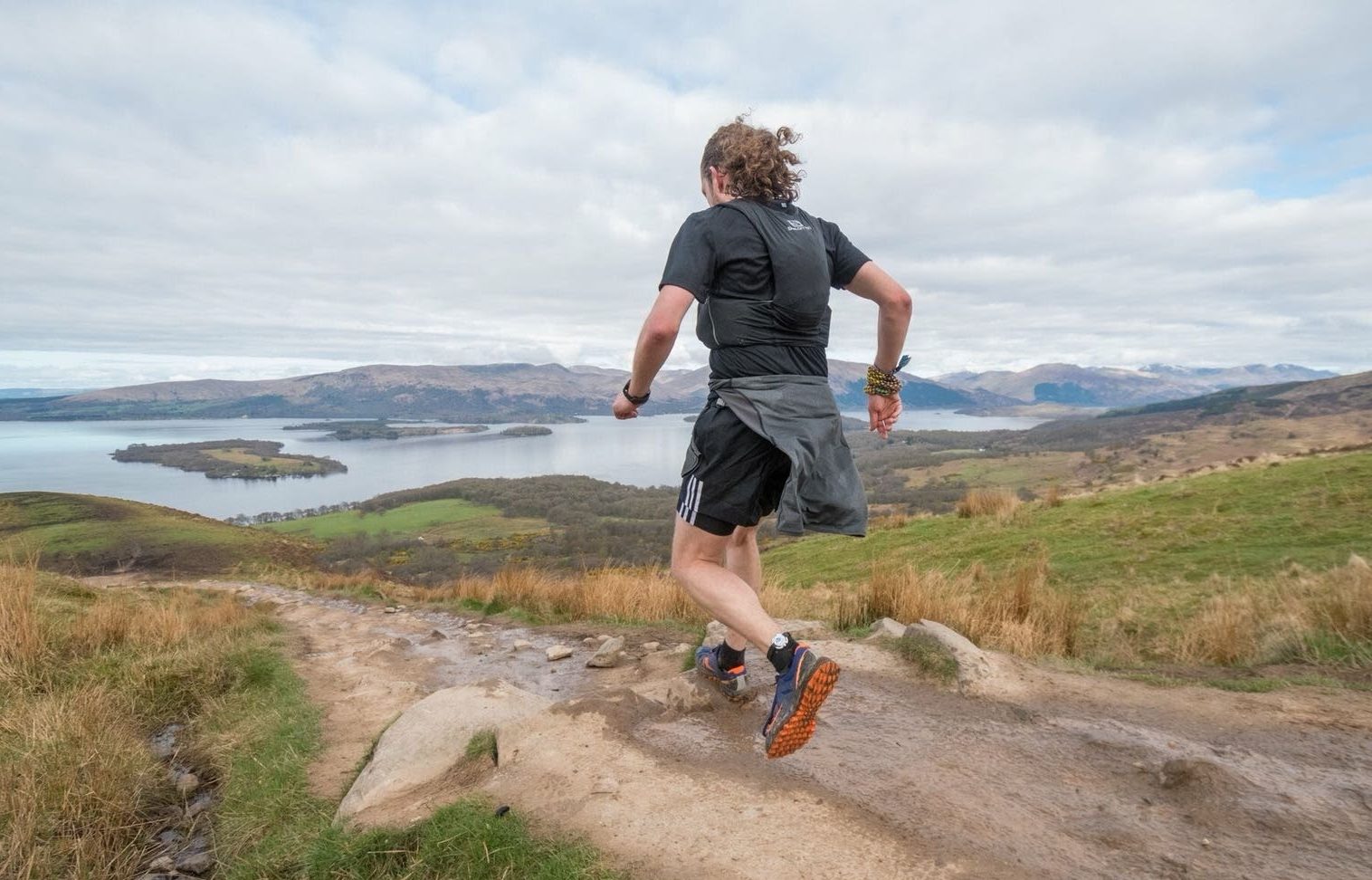 “Are you sure you’ve got everything?”, asked Isla as we headed out the door on Friday night. It was a strange question. She’d seen me go over and over and over my kit in the last few days.

Other than this I’d planned and packed as meticulously as ever. Then, as is tradition, I changed my mind. A Salomon vest, new shorts and Rice Pudding at checkpoints (for the first time ever) all became part of my strategy at the last minute.

To find my target for a new race I study previous results and Strava stats of my peers. 10 hours was a decent bet, given it’s my first go at this distance and the 15 ‘hardest’ miles were an unknown. It was by no means guaranteed. In previous races I’ve finished a minute or two outside my do-able target.

However you might as well give it a go, so I had a scrap of card with 9hr30 splits.

Any likeness to real life splits is purely coincidental.

Training had been mixed. Plenty miles were clocked up, muscles were worked and stretches done. But I missed a peak week due to illness (6 instead of 60 miles) and didn’t manage a long run over 25 miles. I had spent a good bit of time on the course however and was glad to get a look at the last 11 miles recently.

I went into this race not totally sure why I bother. My level feels like no-mans land – not fast enough to mix it up but too well trained for just a finish to feel like an achievement. In the lead up, after more training than I’d even done, potential mistakes or accidents that could ruin my race spun around my mind. Even if things went well I’d maybe be in the top 100. I felt like I trained hard but the result would be either failure, or modest success.

I was dying for the race to begin, when I can forget about everything, just keep running and hopefully rediscover whatever it is I love about ultras.

At the start line I can see why the Fling such a big deal. The slick organisation and friendly vibe obviously draw runners back time and again. It feels simultaneously like a big event and a community day out. On training runs I often see more runners than walkers and I love being among so many like-minded dafties.

I was in a portaloo, as usual, seconds before the start so I joined the waiting horde quite late, then jumped into the back of the sub-10 pen at the last second.

It was a lovely morning – chilly but still and dry – and I got through Drymen running well within myself. On the Conic descent it sounded like a cuckoo was counting us past, calling out to each runner his opinion of our pursuit. This is coming from a creature known for smashing its face off a tree. 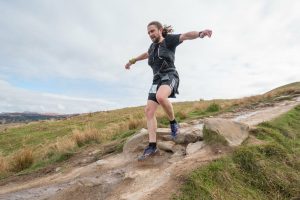 I shed my base-layer on Conic Hill and got to Balmaha more or less on 3 hrs (still 9hr30 pace). The man who helped me here clearly knew his way around a Salomon soft flask and I eventually placed him as Eóin Lennon. On the way out the checkpoint I passed Debbie MC as she yelled something about ‘crushing it’. It’s a great boost to have such fine runners lending their help and support. Humbling in fact.

How many hours to go?

After Balmaha I got into a short people train and somehow felt uncomfortable with the pace. My goal was slipping but I didn’t feel happy trying to push this early (very much a slow starter). I struggled for rhythm so tanned a gel and some Randoms and got my head down until Rowardennan.

I lost 7 minutes on this section. It was acceptable because I had a 30 minute Window Of Glory but I felt worryingly powerless to avoid it.I ate my Rice Pudding, refilled my Tailwind, stretched, had a word with myself, then headed into the 15 mile unknown stretch.

I can’t clearly recall much about this. I remember wrestling with the fact I’d been running for over 4 hours and still had 5 to go. I started to think I might not make it at all and 10 hours was becoming a fantasy. It’s moments like these the race becomes a mental challenge as much physical. I reminded myself that nothing was that sore, I wasn’t feeling sick, I’d run this far before and I just needed to get to the next aid station.

I got in and out of Inversnaid feeling happier. I was a further 10 minutes behind target but if I could stop leaking time I’d rekindle my sub-10 dream.The familiar runners around me were beginning to feel like old friends. Albeit ones I’d never met or spoken to before.

My energy levels were higher for the technical stretch. I enjoyed scrambling over rocks and leaping mud pits. It felt like a rest for some parts of my body. I passed a few runners here and felt like I was making better progress. I heard someone behind me and told them to let me know if they wanted past.

This was my first encounter with Rob Henry. He’d been burning through the field and was also determined to get sub-10.

Finally into the open, the sun felt suddenly hot and I ran with my pursuer until he took off while I had a pee. I then ran with Ben Hopkin, who I met at Devil last year, into Beinglas. Ben had done the Fling before so I asked him if Sub-10 was still possible…”two and half hours? it’ll be tight”.

I met Eóin Lennon again, we chatted, he said something about trying to reel people in, and finding someone to latch onto. If I continued losing time as I’d done for the last 20 miles I’d be in trouble so I had to muster the will to push as hard as I could. I barely managed to calculate that 11 minute/mile average would see me home by the skin of my teeth.

A Reason to Race

I left Beinglas with fresh resolve. I knew the section, I felt physically…OK and mentally refreshed. I could see some people in the distance and I remembered the point of going through this pain.

I may be a few hours behind the winner but if I push myself for the next 10 miles I could over take these people. I’m still racing. My race is with whoever is in front of me, and whoever is trying to overtake me. Trying not to sound too wanky here.

I’d guess I passed 7 runners before Cow Poo Alley, nobody passed me. I stopped for some water at the big gate and headed into the roller coaster. By marching the steepest hills but trying to run everything else, I caught up with someone else, but I couldn’t get past. As I chased them I recognised the running style as my pursuer from earlier, Rob. He looked back and I told him we’ll need to keep this pace up to hit our 10 hour target.

I only remember one guy overtaking us. Just as I caught Rob, this other guy was going down hills like a runaway wheel and we both yelled our encouragement.

I’d latched onto Rob and together we ran and talked the last 10k. We passed a few more people and didn’t stop running once. It became clear we were well under 10 hours but we pressed on. We were helping each other by racing each other.

Rob, leading, bumped open the final gate but it caught on the ground, he bounced off it and went flying. But he got up as quick as he went down, barely breaking stride. I was in the company of a very tough runner, a broken leg wouldn’t stop him at this point. It was this relentless forward progress that made the last 4 miles a pleasure. 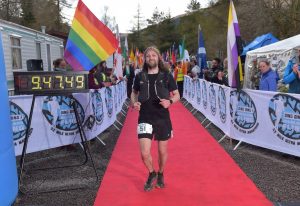 There was brief talk of a sprint finish but I slipped back 5 seconds to finish well within the Window of Glory and with a restored love of running ridiculous distances, just to see how fast I can do it. The splits suggest I passed about 40 runners after Rowardennan. 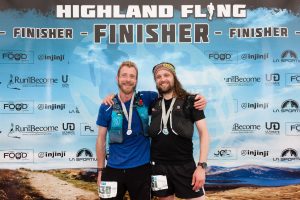 Rob helped me through the longest 5 miles of my life.

The kindness of strangers, the help and encouragement from volunteers, and the common goodwill of everyone involved is a rare and special thing. The pain in my legs is a small price to pay to experience it. Magic. A huge debt of gratitude to everyone who helps make this race what it is.