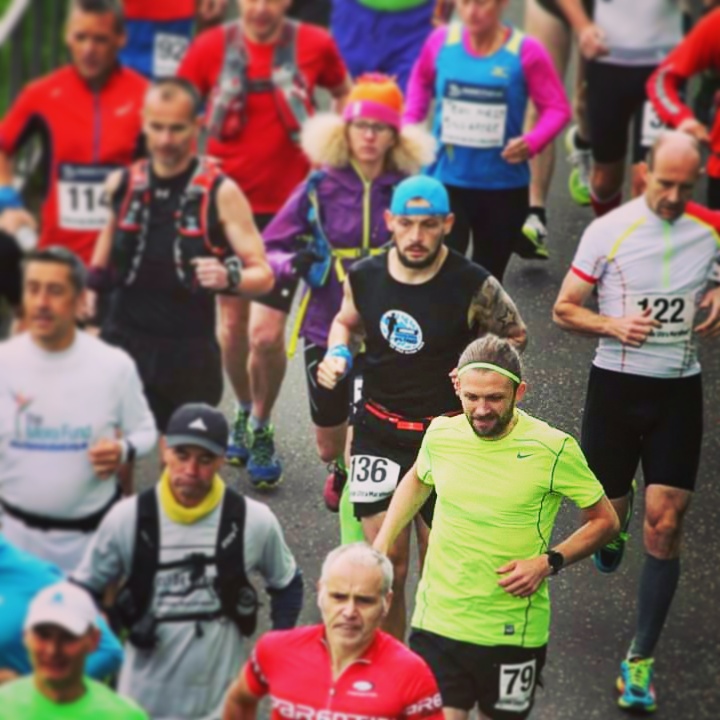 One of the reasons I love running is I love stats; the pace, the splits, the HR, the finish times (of course), I love comparing them with other runners, with my old runs, I love the patterns an interval session makes. I love the fact that I can go out a run and generate beautiful data.

Ultra-running is more than numbers of course and the Clyde Stride is what it’s really all about. The volunteers, the teamwork, the competition, scenery, the challenge, new friends, hugs and beer. This is my second ultra and second Clyde Stride.

How does it feel to run 40 miles? Well that depends which mile. Many of them felt awful, but when you’ve set out to push yourself over such a distance you must expect some…discomfort.

My training started proper on May 1st (comically late) with a 15 mile run that marked the end of a long break from distance running (I’d run further than 10 miles on just 5 occasions since last year’s Stride).

Previously I’d trained by doing months of long runs, (sometimes with a fast finish) and I wanted to train a bit smarter this time. 12 weeks to race day and I scribbled down weekly mileage goals with a short taper, and followed an actual plan, albeit a marathon plan with extended long runs to compensate.

I used HR training for the first time and struggled to hit a reasonable pace in the first few weeks but persevered and soon saw progress.

Interval and hill sessions were new to me which kept my interest but felt odd to do so many short runs. I was happily surprised to see my weekly mileage tot up and in May I ended up with a monthly distance record – 164.55 miles.

June followed with more early mornings, longer runs, my pace creeping up and HR sliding down. 209 miles logged. I’m lucky with injuries which sometimes makes we question how hard I’m really pushing. I had trained hard but, as always, I wondered if I could have pushed a few percent harder?

To find a target time I obsessed over my figures from last year and many other runs, I also looked at the splits of the top finishers of previous years, I even stalked people on Strava to see how they trained. I noted that James Stewart finished in 6:23 two years before he won which gave me great (probably false) encouragement.

The conclusion was that 6 hours was doable, 47 minutes faster than last year, which should give me a top 20 place.

I worked out my food and drink strategy (Nothing til CP1, pick up gels and water bottle there, pick up Camelbak at CP2, if needed pick up food at CP3) and sat back for about 10 days to taper. (By sitting back I mean 25 miles a week).

I stood near the front of the starting group, among better runners than I, listened to James’ pep talk, and set off to cover the first stage at 7:45/mile.

I concentrated on running my own race as I watched the leaders bound over the Stobcross footbridge, impossibly far ahead already. I ran and chatted briefly with ClydeStride legend Davie Mooney who helped me cover about a mile without thinking.

It’s important to get some quick miles in the bag in this race because the first 10 miles are the easiest you’ll see – flat, sheltered, paved – so you have to push as hard as your fitness allows. I checked in at 1:17, a minute behind schedule.

No stop, just pulled on an armband with gels, a hand bottle of Nuun and walked a bit to eat and drink. I hit the first trail section and caught up with Davie again before edging past and up the first hills. I mainly walk up these because I’m obsessed with keeping my HR down in early sections.

It felt like I had a blister starting on my left foot and my right ankle was hurting a bit (as it has a couple of times in training) but pace was good and I rolled into CP2 bang on schedule (2:40).

I changed socks, Rebecca assured me there was no blister, and flung on my Camelbak and set off within about two minutes. I immediately felt the effect of carrying 2 litres of water and struggled to find a good pace and rhythm. I wanted to maintain 8:00/mile but averaged 9:00/mile over the next 6 miles. I was overtaken by two runners and had a head full of negativity. This section feels the most remote and lone runners become quite isolated. I usually enjoy this because it makes me feel like a real ultra runner.

I crossed 26.2 at 3:45, 4 minutes outside my PB, and took encouragement for the final, gradually tougher, 13 miles. Even though I felt I was crawling along I was still running better than I ever have.

I rolled through CP3 feeling better, I didn’t need to replenish my gels or Randoms and carried on, glad of the ever-lightening Camelbak but now worried I would run out of water.

My cardiac fitness is greater than my muscle endurance so while my heart and lungs have plenty left my legs succumb to fatigue. This was the case as I tried to make it up the many climbs of stage 4 but was hampered by legs that didn’t fancy it. (Note to self: squat more).

At this point another runner caught me who also looked like he was digging deep, we traded places a few times between miles 33-37 as we run/walked up and down the hills. I felt like this was my race now, to beat this man, and this thought spurred me on until he eventually lost me up a steep hill and I just couldn’t catch him.

I’d covered stage 4 in just under my target time and was heading for roughly a target finish. I didn’t have enough left for a fast finish to get under the 6 but I didn’t mind. At a point in stage 3 I wondered if I’d finish at all and I crossed the line at 6:01:58. Hurting but happy.

I got my hug, collected my beer and reflected on 12 weeks of training and 6 hours of racing that went largely to plan. I hung around to see a few more runners finish, watch the medal ceremony and chat with some of the folk I’d met on the run like Davie, Ruth, and mohican guy who burned me off on stage 2. I felt very welcomed in the community, even though I only turn up, run and piss off home. I resolved to become more involved with the lovely bunch of people who make up the ultra-running fraternity.

When the results were published I noted the man I couldn’t keep up with, Mark Wheeler, finished in 20th and a tiny voice said that, if I’d trained a few percent harder I could have caught that man and finished in the top 20.

A thought I will take with me into my next run.