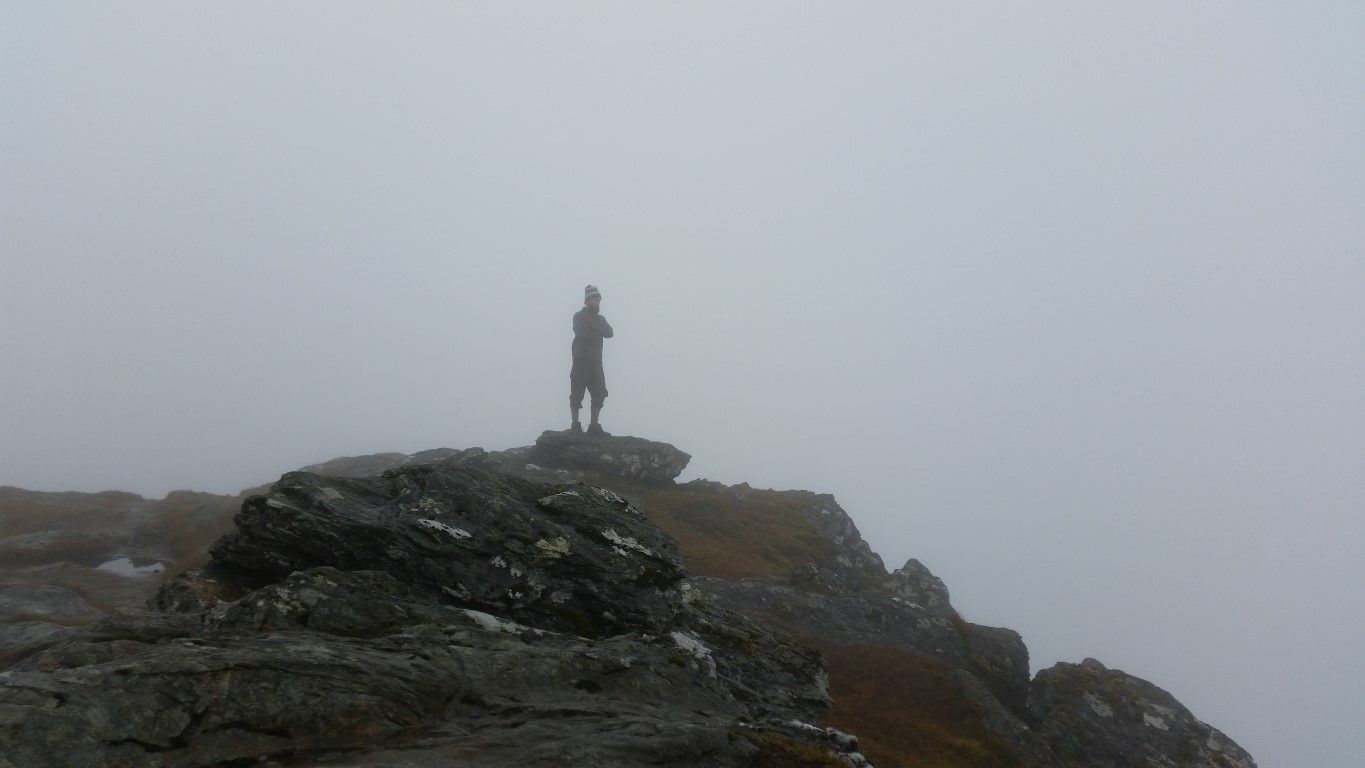 I have ‘climb five Munros’ on my to do list this year. I should have started in Spring. If I did I wouldn’t find myself contemplating two of the ‘Arrochar Alps’ in defiance of the apocalyptic weather forecast I just listened to from the warmth of my bed at 7AM on a Saturday.

But it’s on the to do list and I’ll be damned if the risk of being blown to my death off a 900 metre mountain was going to stop me from doing it. The view from the top alone would no doubt be worth climbing for.

I drive to the base of the first Munro (the class we Scots give any mountain over 3000 feet), called Beinn Narnain. At 3038 feet it’s one of the shorter Munros but I was starting at sea level and had a formidable climb ahead of me. The weather was unusually warm for Scotland in October but visibility was poor, showers were heavy and the wind was ominously strong for only being at 600 feet. I turned and saw a nice view of Arrochar and Loch Long.

Looking back towards Arrochar

I ploughed onwards up what was normally a path, but after recent heavy rain was basically a stream. It was hard going and I felt it best to do one mountain and come back down the way I went, instead of the other side.

“The path may be wet after heavy rain”

I was conscious of the fact I was out here alone with no mobile signal but I’d packed sensibly and told some people what I was up to. My most trusted friend had instructions to clear my internet history should I perish on the hill.

After nearly two hours I was close to the top, I had to climb up through a rocky gully and it was here that the gale-force winds decided to whip up. I was buffeted pretty hard and had to really hug the rock face to remain balanced. I paused for a few minutes as I knew I was only a few meters below the exposed summit of Beinn Narnain.

The wind was pretty ferocious up here but I kept low, stayed away from the edges and managed to get a few snaps. I felt safe continuing on down the other side but my legs were feeling the burn so I hadn’t yet decided to go for another peak in Beinn Ime.

Visibility was still bad. I had a good map and a guide to the path so wasn’t in any real danger but was disappointed I couldn’t take in any of the spectacular scenery I knew was around me.

I started descending quite smartly through the mist, the ground was boggy but easy to traverse. I’d decide to go up Beinn Ime once I got to the path at the bottom of the valley between it and Beinn Narnain, with The Cobbler slightly to the south.

At about 2500 feet a gap in the cloud blew past and gave me a brief and unexpected glimpse of The Cobbler, one of the most spectacular mountains in Scotland. It was right there beside me. Seeing it suddenly loom into view was breathtaking. I forgot I was really high up. As I grabbed for my camera I saw the valleys appear below me. The cloud was blown away in a glorious reveal that would win an Oscar. I took a couple of shots but even an IMAX couldn’t come close to this.

The ridge connecting the two Munros

It felt like The Cobbler sneaked up on me.

The south face of Beinn Ime

The mountains of Scotland can be disorientating in their scale and beauty. Great grassy glens give way to impossible rock formations. Acres of evergreens underline colossal faces of mountains that have and will remain largely unchanged by humanity. Somewhere far below I could make out a gravel road and some fences, a few people on a path like veins and vessels on a dinosaur’s back. Utterly insignificant. Just a flea the mountain hosts for a cosmic split-second.

Just as quickly as the were revealed they were obscured. Back to walking through moss and mist. The brief glimpse had, though, given me the impetus to continue up the second mountain, not least in case this gap in cloud was an indication of clearer conditions.

As it turns out, it wasn’t. This is Scotland and it is October. I’m at 2000+ feet so it’s going to be a rare day to have sunshine. It was a gentle walk up Beinn Ime, I got to the summit only an hour after the last one. It was still very windy but I found a rocky shelter to have some lunch (remember to take a flask next time).

The descent was unremarkable save for a terrifying moment I heard a girls voice but could see nothing resembling a human. I’d gone from an sfx blockbuster to a horror and the hairs on my neck bristled briefly until I saw two female climbers emerge from the mist not 30 feet away. I coolly spluttered a conversation and headed on down.

I took the well worn path through one of the valleys back to the car park, I saw about 15-20 other walkers out as I jogged the 3 miles round the side of Beinn Narnain. I looked up a couple of times to see if I could spot where I had just been climbing. I couldn’t of course. It was still very misty.

The sun came out when I was about 10 minutes from the car and gave me a warming blast of Autumn. too often we complain it goes from Summer to Winter but I think Autumn is out there if you look for it.

I tried to climb two Munros last year, (before I stopped smoking and took up running), I got up one and a bit before my body just couldn’t push any further. That was around a 5 hour walk if I recall. Today I managed to climb two Munros and had plenty left for a 5K trail run finishing in under four and a half hours. Being fit is as wonderful as I always imagined it would be.

I set aside 30 minutes to do a quick climb report, that was two hours ago. I’ve enjoyed writing this and I hope you enjoyed reading it.